In total, four new bridges will connect downtown Toronto to the future Villiers Island, the new island that will be created by extending the Don River through the Port Lands. The first of these bridges opened in October 2022.

The First Bridge is Open!

People are already walking, cycling, and driving across the sleek yellow bridge at Polson Street. This bridge crosses the future mouth of the Don River. Now that it’s open, we’ll start digging through the original Cherry Street, connecting the new river valley we’ve already built to the east with its future outlet into Polson Slip.

The Cherry Street South Bridge arrived in December, 2021. It followed the same route as the other bridges, travelling from Dartmouth, Nova Scotia, to Toronto via the St. Lawrence Seaway.

This bridge will cross the new mouth of the Don River where the river meets the lake, at what is currently Polson Slip. We’re rebuilding Cherry Street slightly west of its current location. The new river will flow east-west across Cherry Street, so we need a bridge at this location. This is one of two crossings along the new Cherry Street. The first crossing is the Cherry Street North Bridge, which has two bridges that span the Keating Channel (the first of these two bridges arrived in November 2020).

While all the bridges have a cohesive look, they were all installed using different techniques. Check out this video to see an update on the installation of the bridges that have arrived already.

Learn more about how the four bridges were designed. Explore this map to see where we’re building the new Port Lands bridges.

The first of two bridges that will cross the Keating Channel at Cherry Street arrived in Fall 2020. That bridge will be dedicated to a future transit line into the Port Lands.

The second bridge for this location will be dedicated to pedestrians, cyclists and motorists. That bridge arrived in July 2022.

Watch this highlight reel of the first bridge’s journey from the east coast to Toronto in 2020.

We kicked off the bridge’s journey, live from the east coast. The virtual watch party wished the bridge a Bon Voyage!

Waterfront Toronto tracked the bridge’s progress on twitter using #BridgeWatchTO to give daily updates on the bridge’s location. A live event was held to mark the arrival of the first of the four new bridges for Toronto’s Port Lands. Local officials travelled to the construction site to celebrate this important milestone.

Check out the route the bridges will travel to get from Dartmouth to Toronto. 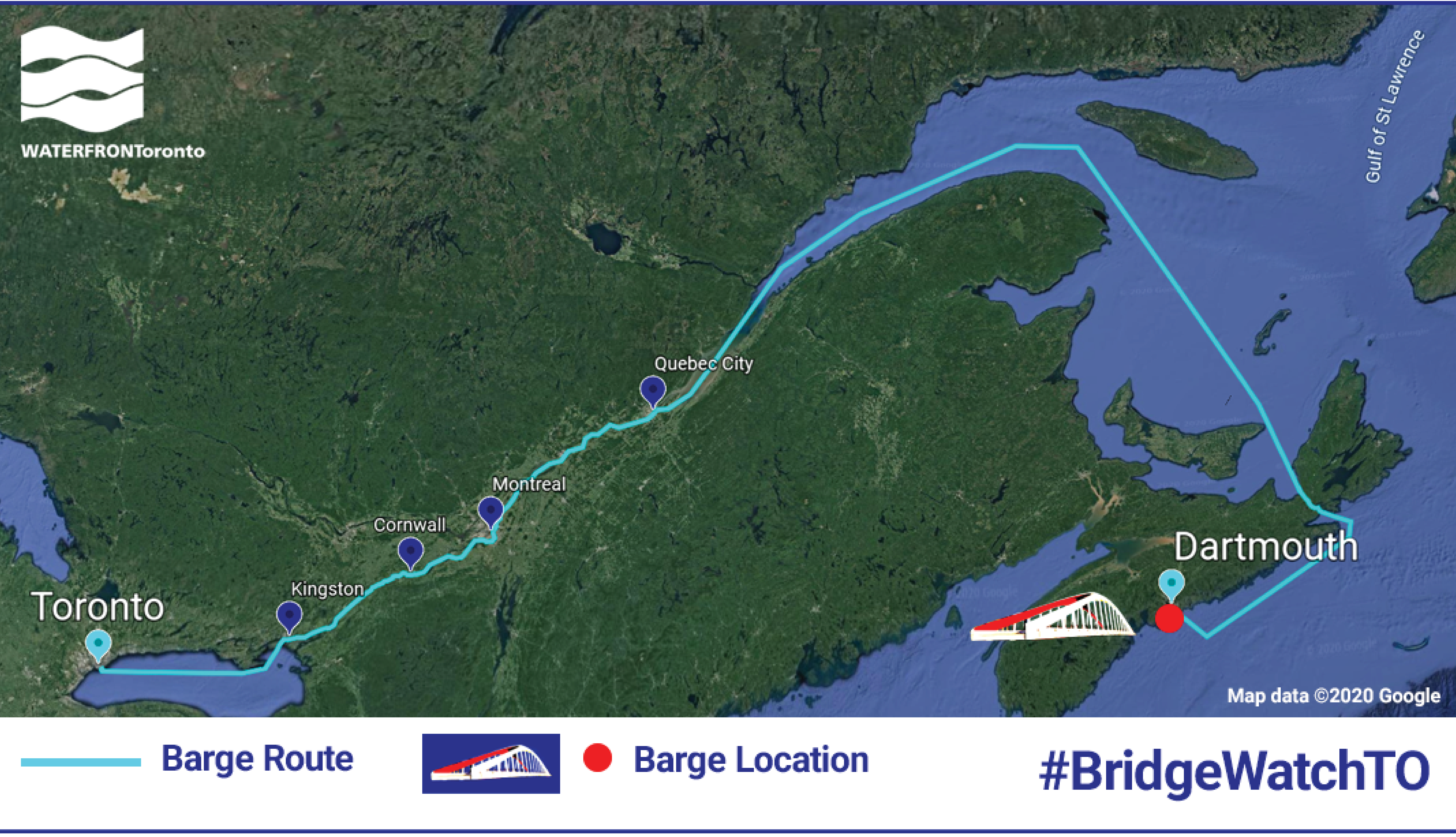 What to watch next: