How Will Construction Affect Me?

We want to keep you aware of the extensive work underway in this area and share any information that might be useful. Check here for updates on construction, road closures and traffic delays. We will also share the latest information on our construction process, how we plan to protect the environment and how construction may impact your community. 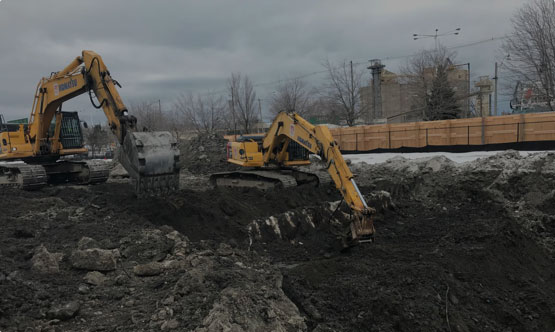 For recent or upcoming public meetings about construction, click here.

Now that the ramps are removed, the most eastern access point to and from the Gardiner Expressway is at Jarvis Street. The realigned Gardiner and new ramps east of Cherry Street are in design now and construction is tentatively scheduled to start in 2026. The City of Toronto will share more information regarding ramp realignment and construction starting after the completion of this project as it becomes available. You can find updates on the City’s Gardiner East project here.

Starting in late January 2022, traffic on Lake Shore Boulevard East between Cherry Street and Carlaw Avenue will be diverted to the north side of the road, and in the median east of Don Roadway. This lane configuration will change a few times over the next two years to enable works. Updates will be provided through future construction notices.

These lane diversions are needed while we rebuild the Lake Shore Bridge over the Don River, and rebuild Lake Shore Boulevard East between Don Roadway and Carlaw Avenue, including upgraded sidewalk and bike facilities. Lengthening the Lake Shore Bridge is a critical element of our design to protect this area from flooding. Widening the bridge makes more room for people who cycle and walk and new green space while still moving vehicular traffic.

See a static diagram of the lane diversions shown in the this video here.

Please note these dates are anticipated based on current information, and subject to change due to changes in construction schedule, weather, or unforeseen circumstances.

For an overview of the Lake Shore Boulevard East project, click here. 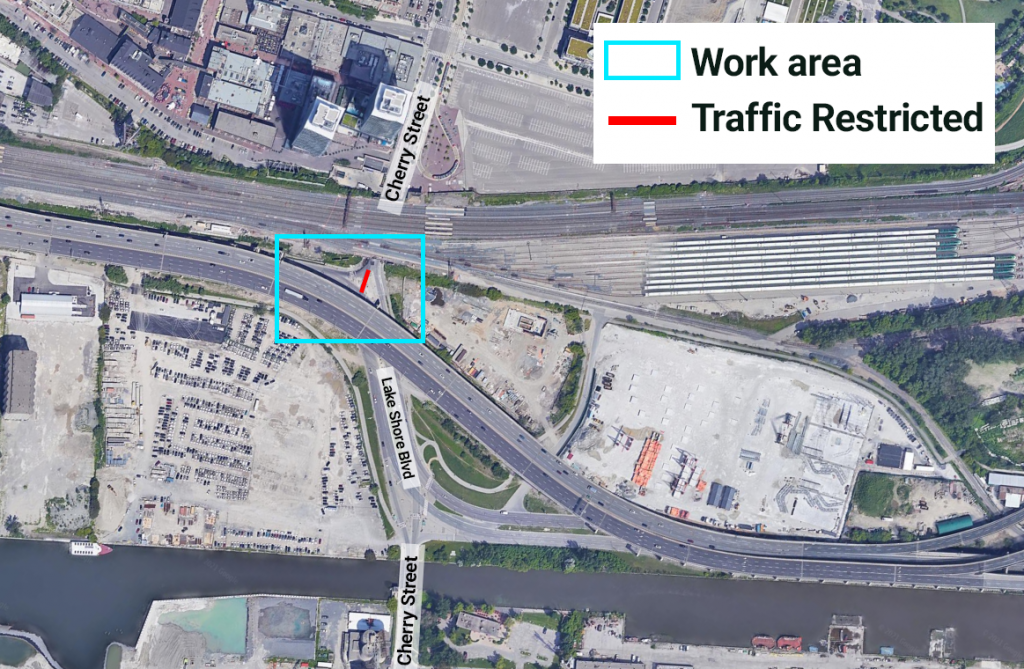 Above: This map shows the location of the intersection improvements.

To construct permanent flood protection along Don Roadway and rebuild the road, Don Roadway will be closed south of Lake Shore Boulevard starting at 7 a.m. on November 30, 2021. 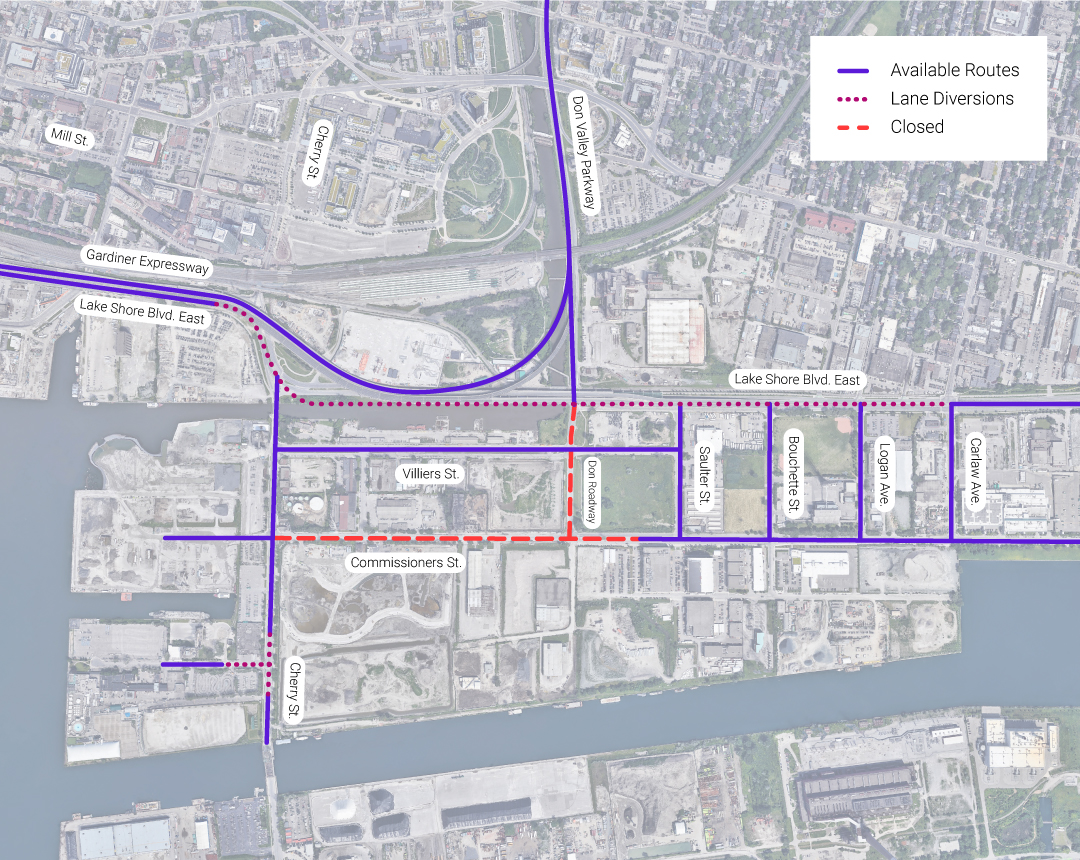 Above: This map shows the available routes through the Port Lands as of December 2021. Recommended routes to and from the Port Lands and Don Valley Parkway are described below.

As part of our plans for flood protection, we need to widen the Don River north of where it meets the Keating Channel. We’re building an area to manage sediment and debris that comes down the river in the area south of Corktown Common. As construction activities increase in this area, the potential for conflicts between cyclists and construction equipment traffic will be a safety concern.  When the Port Lands Flood Protection project is complete in 2024, the trail will be ready to reopen.

Starting Sunday, January 16, the Lower Don Trail will be closed between Corktown Common and Cherry Street. This closure is in addition to the temporary closure of the multi-use trail on Lake Shore Boulevard between Don Roadway and Logan Avenue and the permanent closure of the cycling/pedestrian bridge over the Don River.

A detour route is in place along Mill Street, see map below.

The cycling/pedestrian bridge over the Don River has been removed. The multi-use trail along Lake Shore Boulevard between Don Roadway and Logan Avenue are currently closed. 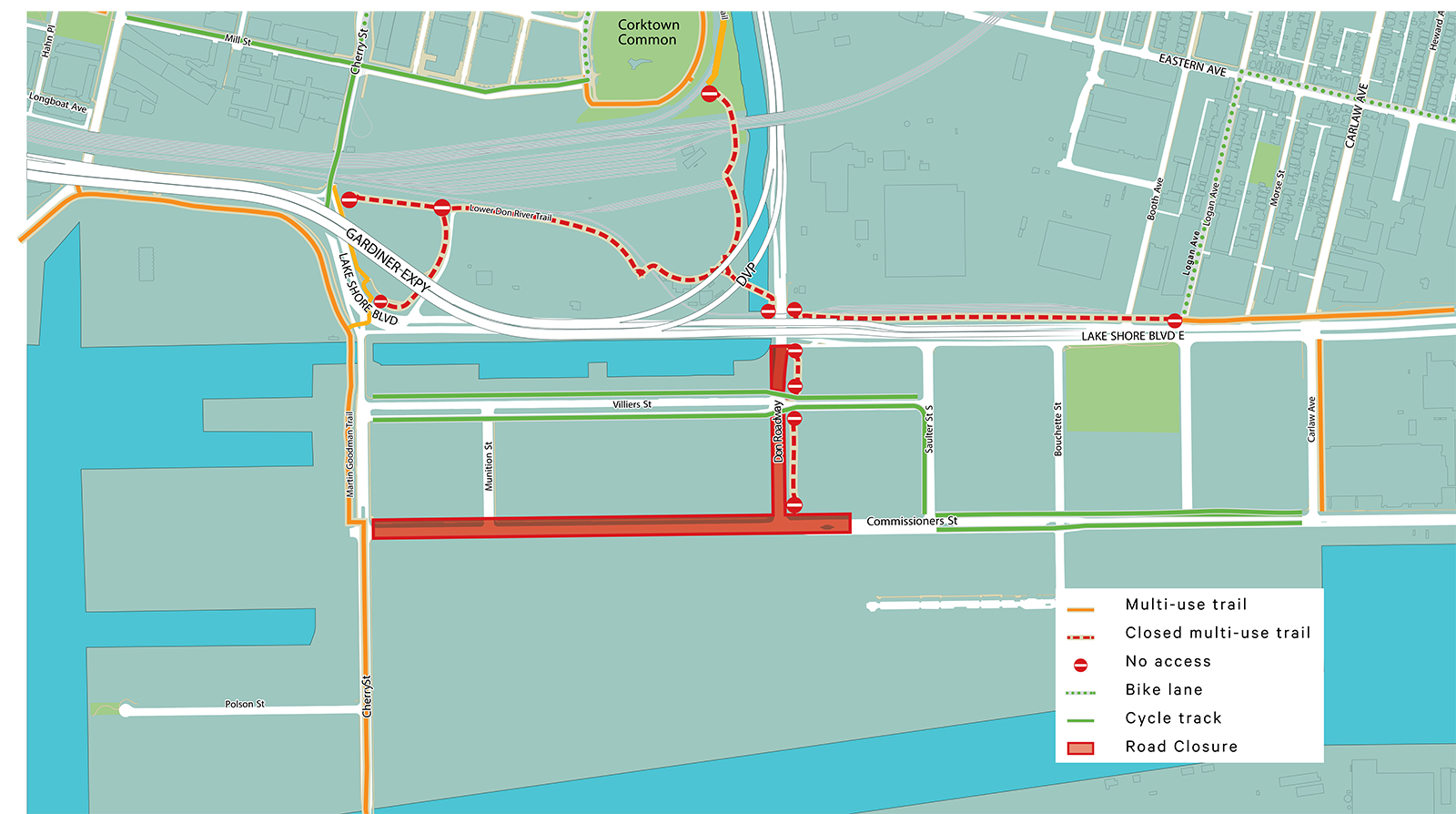 Above: A map showing the cycling detour routes around the closure of the Lower Don Trail between Corktown Common and Cherry Street and the closure of the multi-use trail along Lake Shore Boulevard between Don Roadway and Logan Avenue. See a larger version of this map here.

Both closures will remain in place until Summer 2022.

See all construction notices issued for this project here.

To create a new, kilometre-long river valley, renaturalized river mouth and spillway, we’ll excavate 1.4 million cubic metres of soil — that’s enough to fill the Rogers Centre. We plan on reusing as much of this soil as possible on site. We’ll also rebuild sections of the Don Roadway, Cherry and Commissioners Street and remove portions of Villiers Street. And we’ll raise grades on the new Villiers Island and east of the Don Roadway by one to three metres.

This is a seven-year construction project – and one of the largest infrastructure projects in Toronto’s history.

During the Don Mouth Naturalization and Port Lands Flood Protection Environmental Assessment, the project team identified potential impacts from this construction. The team has now developed a series of plans to manage these impacts. Following these Environmental Management Plans will allow us to minimize impacts to the environment during and after construction. As construction progresses, these plans may be modified to reflect new information or challenges encountered on the construction site.

To make the details of these plans easier to find and understand, we’ve summarized each plan. Those summaries are available here:

We recognize the challenges and inconveniences construction presents to local communities. While some construction projects cannot be changed or delayed, we minimize impacts as best we can.

Here are some of the ways we’re reducing construction impacts for the Lake Shore Boulevard East project:

Do you have a concern, complaint or question about construction? Click here to submit your inquiry to the project team.

Construction on the Port Lands Flood Protection project started in 2017 and will be done in 2024. See what’s coming up over the next few months. We’ll continue to adjust our construction sequencing and timing to account for factors like nearby construction and coordination with our partners. Watch this video showing the current construction schedule. Find out more about what we’re building. 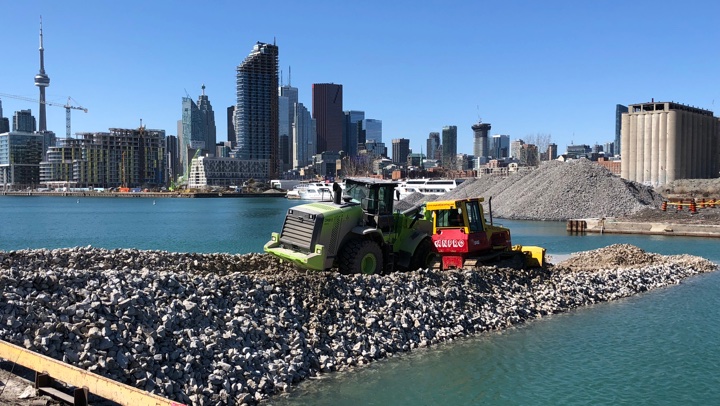 How we will undo the negative effects of industrial activities while protecting the lake and river. 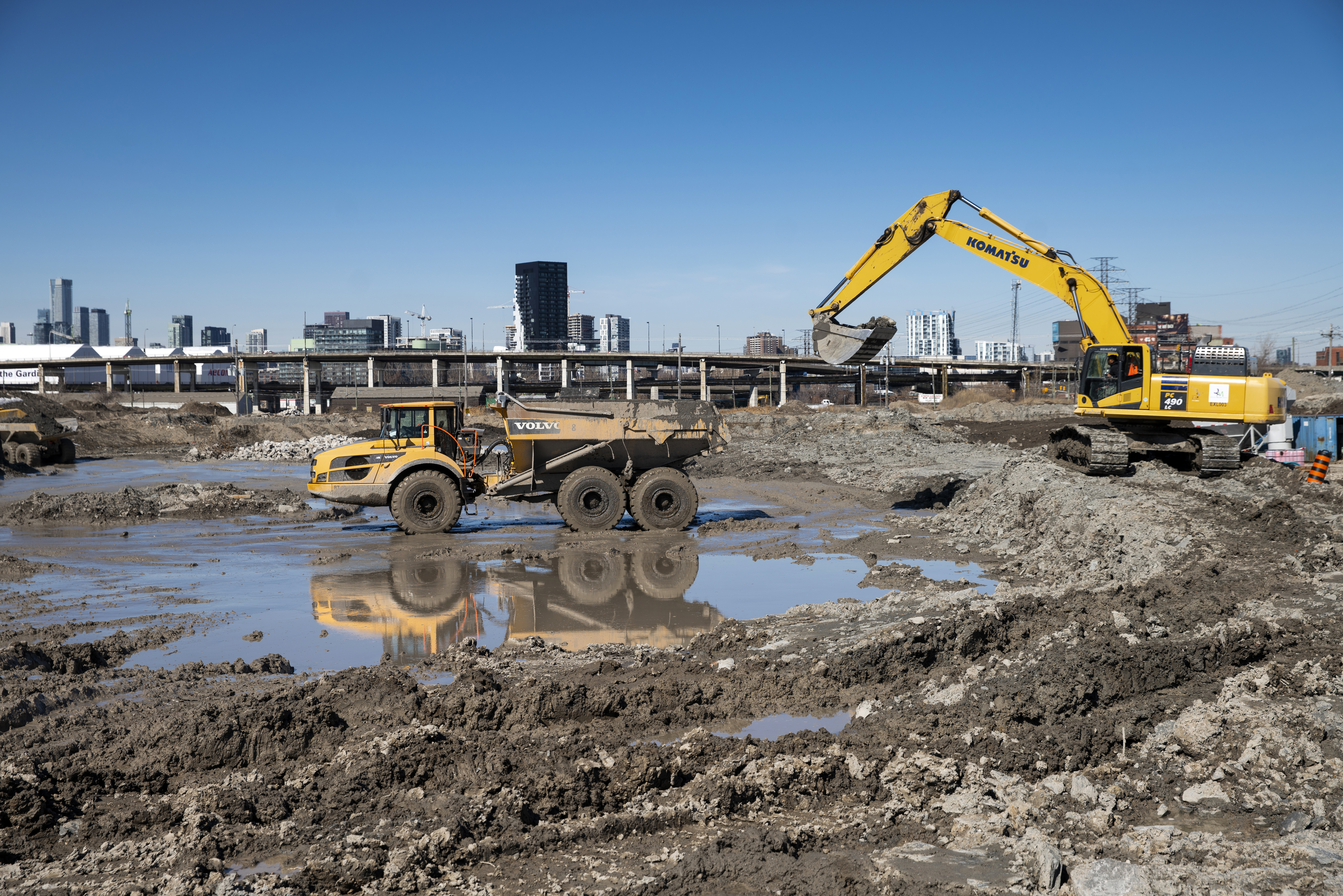 How we'll clean the soil that is excavated in the Port Lands.

How We're Digging a New River in the Port Lands

Learn how a new path for the Don River will let the water move more naturally, giving floodwaters a safe path into Lake Ontario.

Rocky is a rock ripping bucket. On this project, he’ll dig as deep as three metres in to bedrock to create slurry walls along the edges of the future river valley. 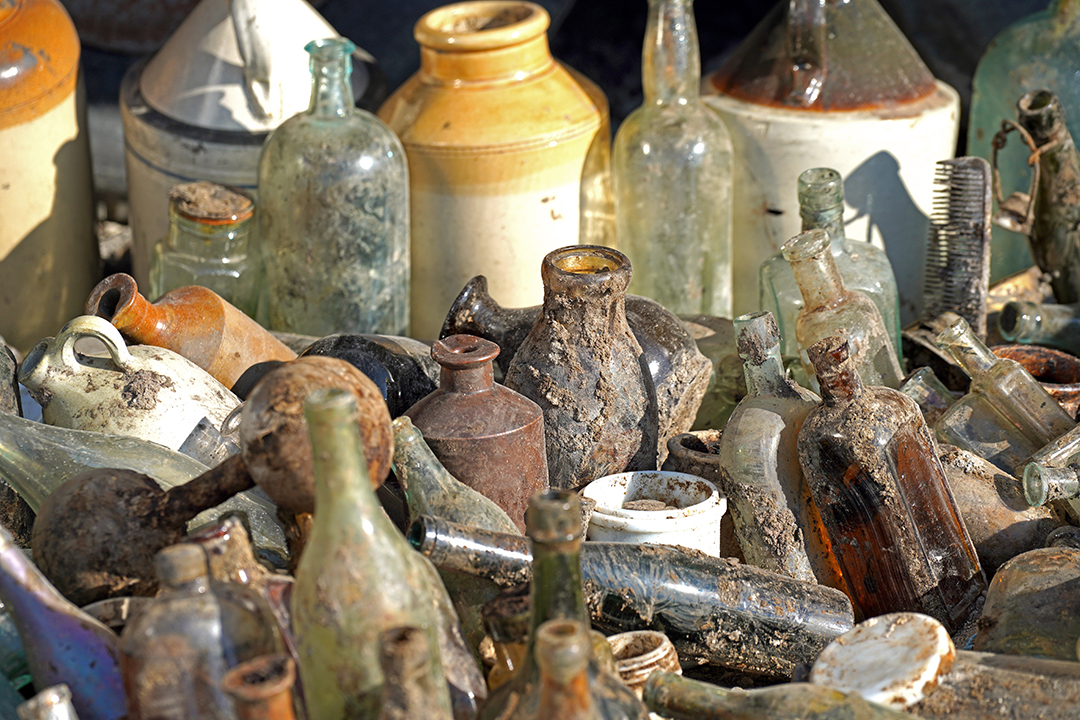 Found Objects in the Port Lands

We’re excavating 1.4 million cubic metres of soil. In the process, we’re uncovering some remnants of the area’s past. 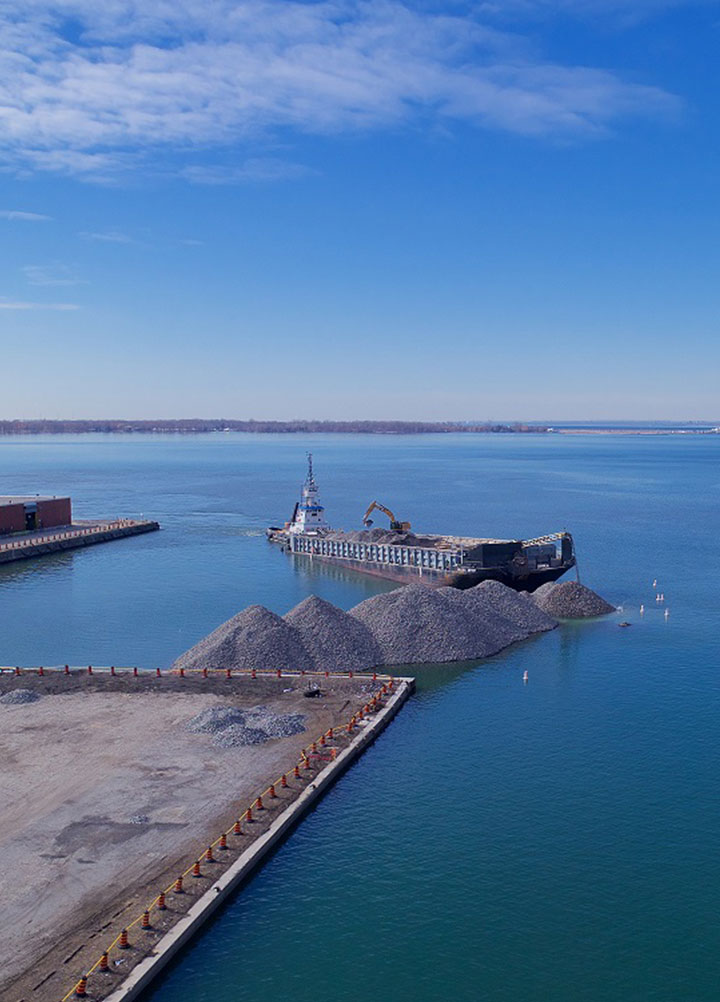 Have a question, concern or complaint about construction?

Contact our project team or email us at info@waterfrontoronto.ca.