Found Objects in the Port Lands

Construction in the Port Lands will restore the mouth of the Don River to a natural, marshy outlet into Lake Ontario. To do this, we’re excavating 1.4 million cubic metres of soil. In the process, we’re uncovering some remnants of the area’s past.

A Brief History of Fisherman’s Island

Going back thousands of years, the Don River and its outlet into the lake, Ashbridge’s Bay Marsh, was a gathering place and a source of food and water. The large sandbar that is now Cherry Beach was also a place of spiritual significance for many Indigenous people. Around the 1850s, this sandbar became known as Fisherman’s Island, where settlers established a commercial fishery and continued to live even as the marsh became polluted with refuse from the increasingly populated and industrialized city.

In the early 1800s, the Toronto Islands were part of a large sandbar that connected to the foot of present-day Woodbine Avenue. A major storm in 1858 displaced enough of the sandbar to create the Eastern Gap channel, establishing what is now the Toronto Islands in the west and what became known as Fisherman’s Island on the remaining sandbar in the east. The area between the sandbar, also called Fisherman’s Island, and the mainland, remained separated by the Ashbridge’s Bay marsh.

Like the Toronto Islands today, people lived and worked on Fisherman’s Island, travelling to and from the city of Toronto by boat or by travelling over a breakwater that was built in 1882.

We unearthed a breakwater in September 2020. Read more about it here.

What comes out of a twentieth-century dump? 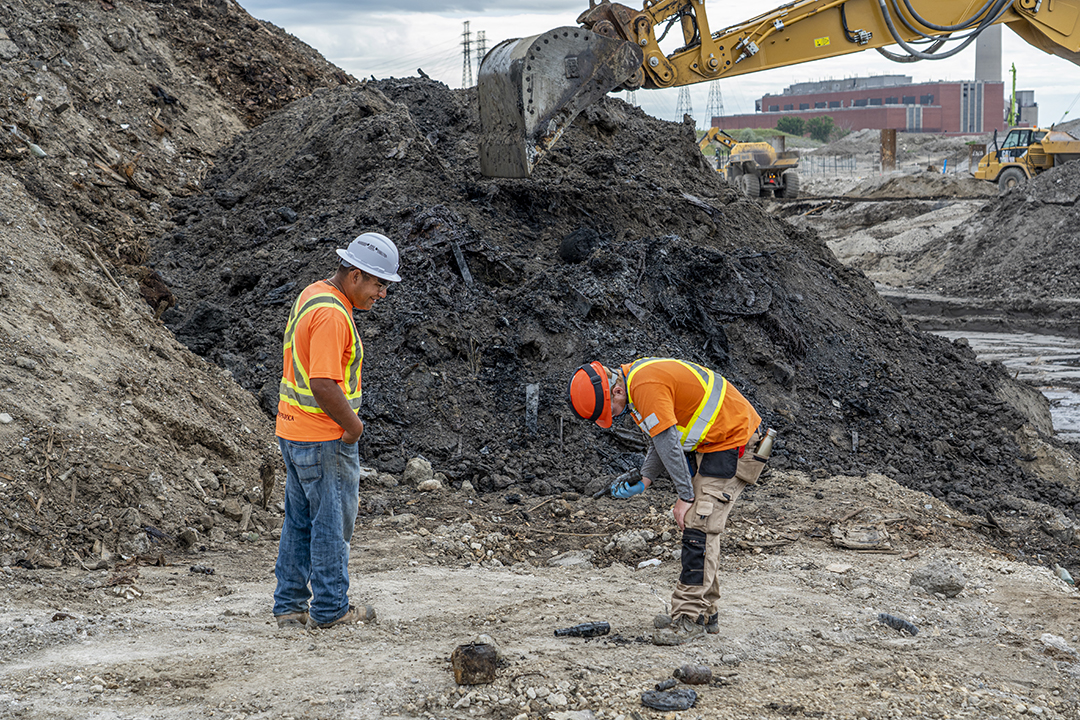 Archeologists from Toronto and Region Conservation Authority (TRCA), along with the Mississaugas of the Credit First Nation, are monitoring the excavation of the new river valley to identify and document items that may be of historical or cultural significance.

By the early 1900s, the Toronto Harbour Commission had filled in the marshland at the mouth of the Don River and around Fisherman’s Island to create an industrial district, establishing the Port Lands and Cherry Beach that we see today. Click here to learn more about the industrial history of the Port Lands.

Most of the objects found during our excavation to create a river valley through the Port Lands were deposited in the 1900s either as garbage or during lakefilling. We can’t retain any of these objects due to the contamination of the surrounding soils from industrial uses in the Port Lands. However, TRCA’s archaeologist’s have documented many recovered objects.

So what comes out of a twentieth-century dump? Check out the gallery below.

Exploring Toronto’s history through these objects

We found many bottles from soda pop proprietors Charles Wilson during the deep excavation of the river valley. His trademark squirrel makes them very recognizable! We also uncovered a number of bottles made by his rival, J. J. McLaughlin, the original maker of Canada Dry.

The history of soda pop in Canada has roots stretching back to 1820 when small businesses opened and began carbonating beverages and occasionally advertised them as tonics and medicinal elixirs. In 1875, Charles Wilson began bottling soda at his Sherbourne Street factory, just north of Wellesley Street. His most popular beverage quickly became Wilson’s Ginger Ale, which was often pitted against today’s well-known Canada Dry made by J.J. McLaughlin.

By 1929, Canada had nearly 350 beverage production plants that produced over $12 million in sales- $185 million today. Wilson’s son expanded factory operation in the early 20th century, but by 1985 the business closed.

We’ve come across lots of newspaper fragments with snippets of stories and ads. Often they’re degraded to the point where it’s nearly impossible to read the original newsprint. But sometimes they’re remarkably well-preserved, like this ad for Bredin Best Bread. 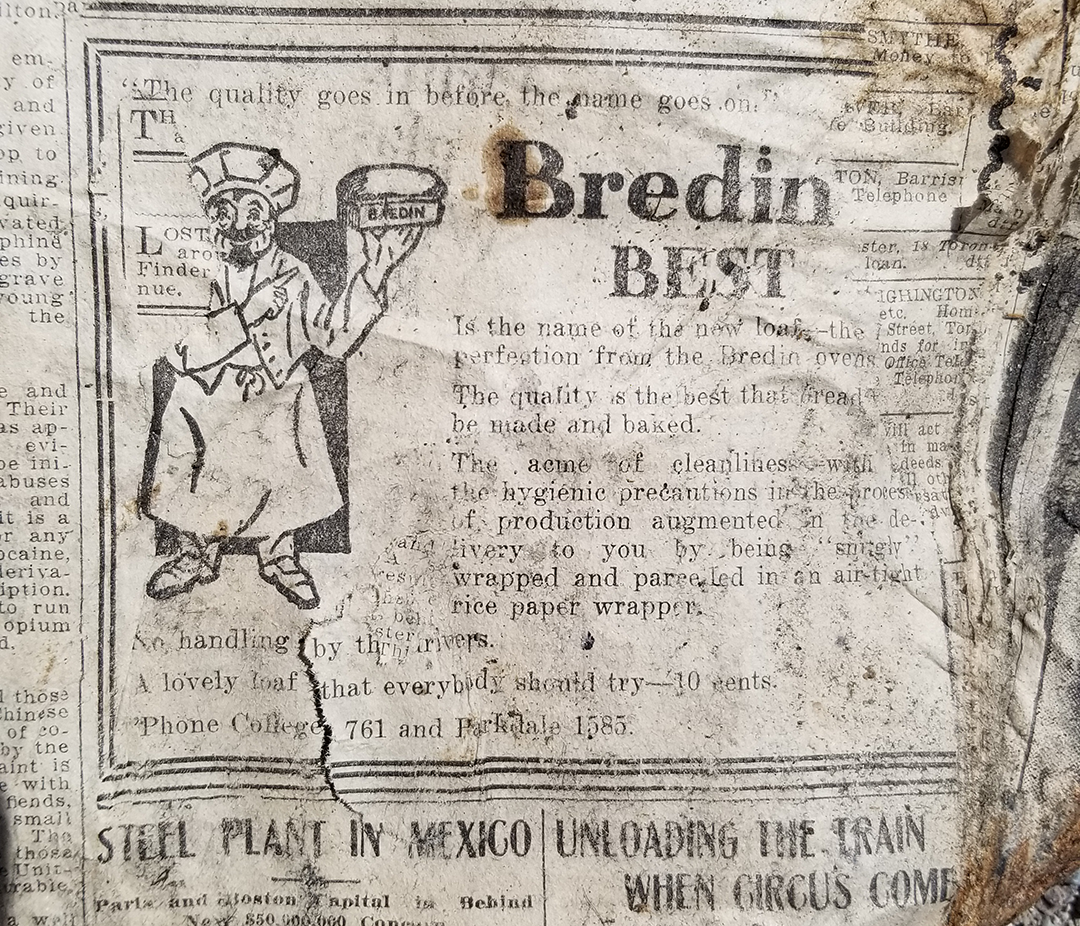 In 1883, Mark Bredin and his family immigrated from Ireland to Toronto, and soon after established a bread baking business with his brothers. These brothers managed an entire business from 104 Augusta Ave in Kensington Market before expanding locations to include Parkdale and later moving operations to 160-164 Avenue Road, near Davenport. 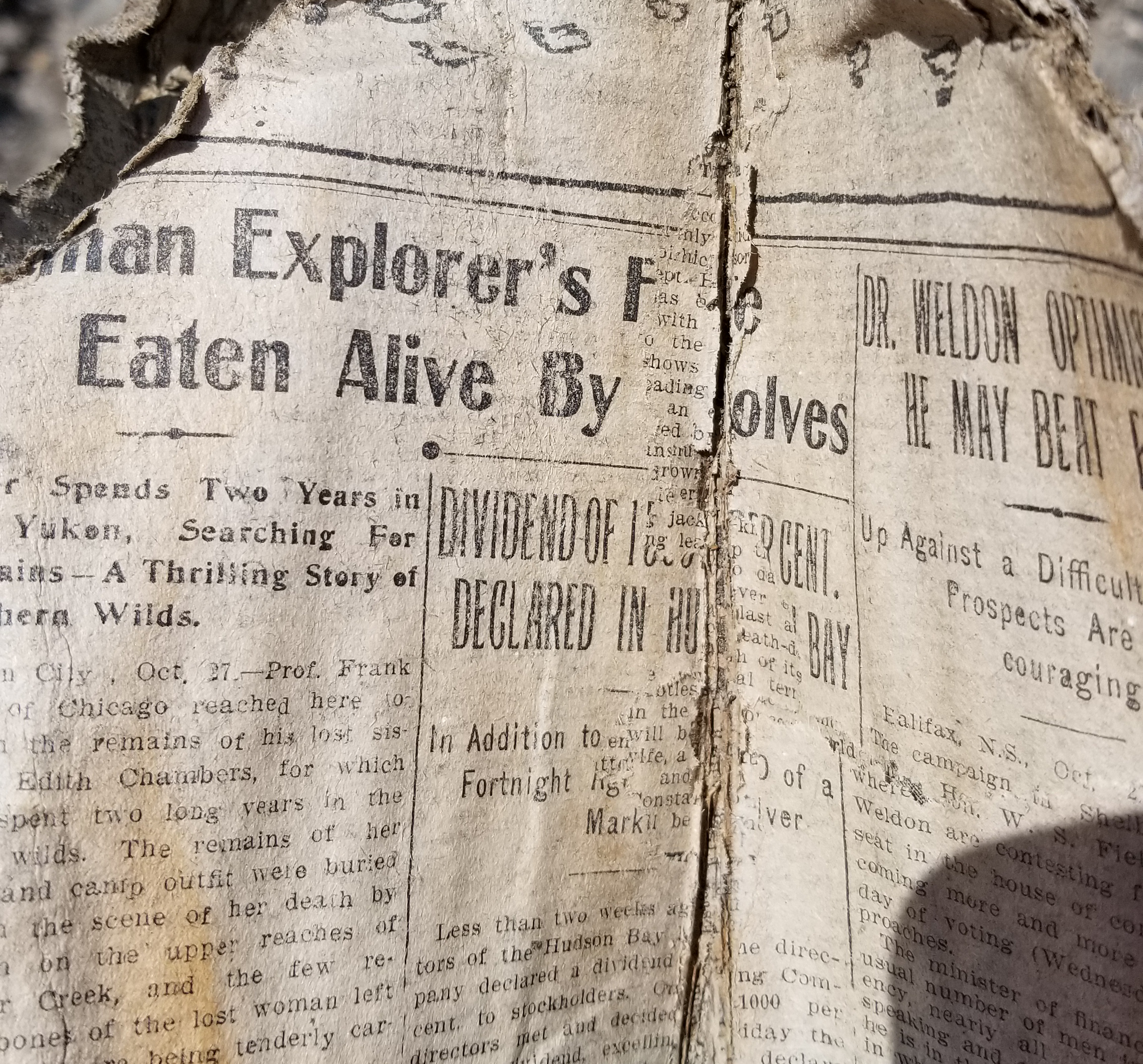 This fragment from an unknown paper shares the story of Edith Chambers, a turn-of-the-century explorer who went to the Yukon during the gold rush. The headline is likely a little bit of an exaggeration, “Woman Explorer’s Fate Eaten Alive by Wolves.”  She detailed the final weeks of her life in a diary that was later found and sent to her brother, Frank Hewitt.

Like any dump, the Ashbridge’s Bay received unwanted household items. While these items aren’t of any historical significance, they do offer a snapshot of life in the 1900s.

Photographs of Found Objects, by Vid Ingelevics and Ryan Walker

Watch the photographers talk about what it was like to see the excavation of the breakwall up close.

Want to see more photos by our photographers Vid Ingelevics and Ryan Walker? Check out this page.