See the latest pictures from the construction site.

Would you like to hop off the streetcar and travel by kayak? How about losing yourself in a wooded ski trail on your lunch break? Maybe you’d like to visit a new island, within view of Toronto’s existing Islands?

This will all be possible after 2024.

In winter 2018, Waterfront Toronto started excavation on a new kilometer-long river valley and new mouth for the Don River – a key part of our $1.25-billion, seven-year construction project protecting almost 300 hectares of waterfront land from flooding. Until the risk of flooding is removed and the legacy of contamination left by former industrial uses is addressed, no new homes, offices, parks or public spaces can be built in the Port Lands.

Along with 25 hectares of publicly accessible green space, we’re creating an entirely new island right downtown. We’ll built the streets, underground utilities and trail and transit connections needed to make a new neighbourhood. Once developed, Villiers Island will provide homes, community amenities and places to work for thousands of people. Find the full breakdown of what we’re building here.

Check out this blog series to learn how we’ll create a new river valley, the biggest playground in Toronto, a system of nature and parks bigger than 25 football fields, and the greenest streets in Toronto: 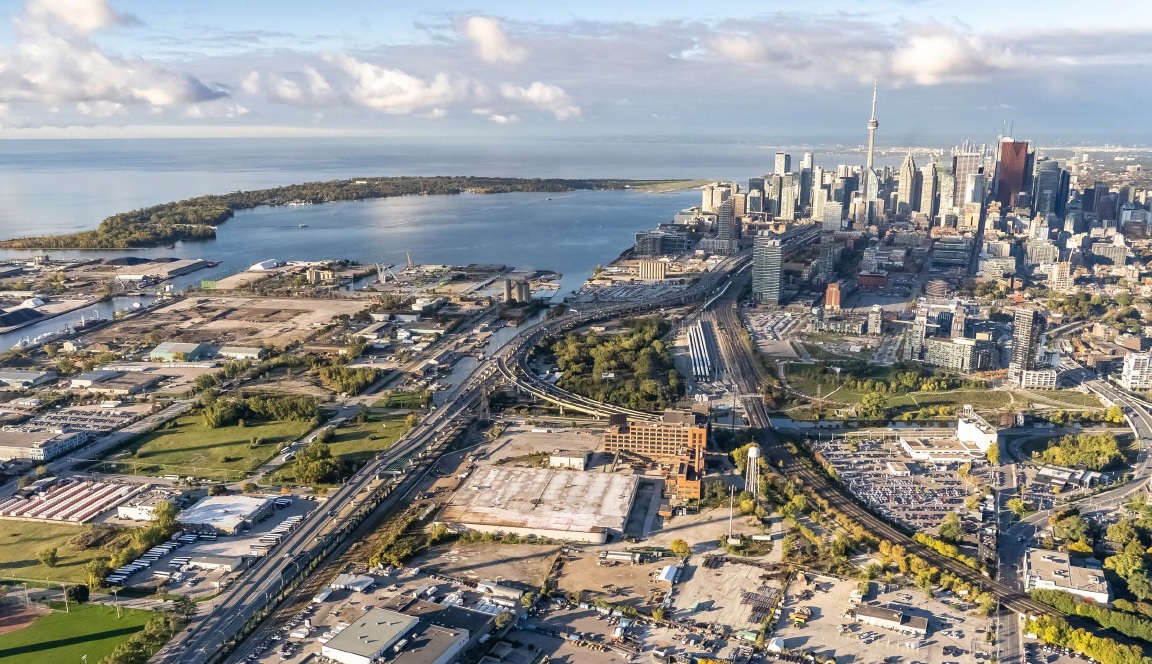 Looking west from Don Roadway towards the Inner Harbour and Toronto Islands. In the foreground, you can see Corktown Common, a park we built in 2014 that doubles as flood protection for the emerging West Don lands community. South of Lake Shore, you can see our construction area in the Port Lands, framed by the Keating Channel to the north and Ship Channel to the South.

In 2014, Waterfront Toronto completed a flood protection landform beneath Corktown Common that protected 210 hectares of Toronto’s downtown east end and a portion of Toronto’s financial district from flooding. This first phase of flood protection allowed us to develop the West Don Lands, a now thriving community with new affordable housing, parks, community amenities and an extension of the 514 streetcar line.

The Port Lands has this same potential – on a larger scale. This 400-hectare area is almost one third of Toronto’s waterfront. It’s as big as downtown Toronto from Spadina to Parliament Street and Front to College Street.

In 2017, governments announced a joint commitment of $1.25-billion for Waterfront Toronto to start building the new river valley, parks, streets, bridges and infrastructure that protect the Port Lands from flooding and lay the foundation for future communities. Construction is now well underway in the Port Lands. Check out the latest construction notices and images here. Find a project timeline here and a construction schedule here. And learn how you can get involved here.

We’ve been asking members of the waterfront community to tell us what excites them most about this game-changing project. We’ve gotten lots of postcards telling us what people are most looking forward to when this project is complete in 2024. So, what will you do in 2024? Fill out this quick poll and let us know what you’re most excited about!

Taking the next big step in waterfront revitalization together

Community members and project partners braved the cold back in November 2018 to help celebrate construction progress on this project. 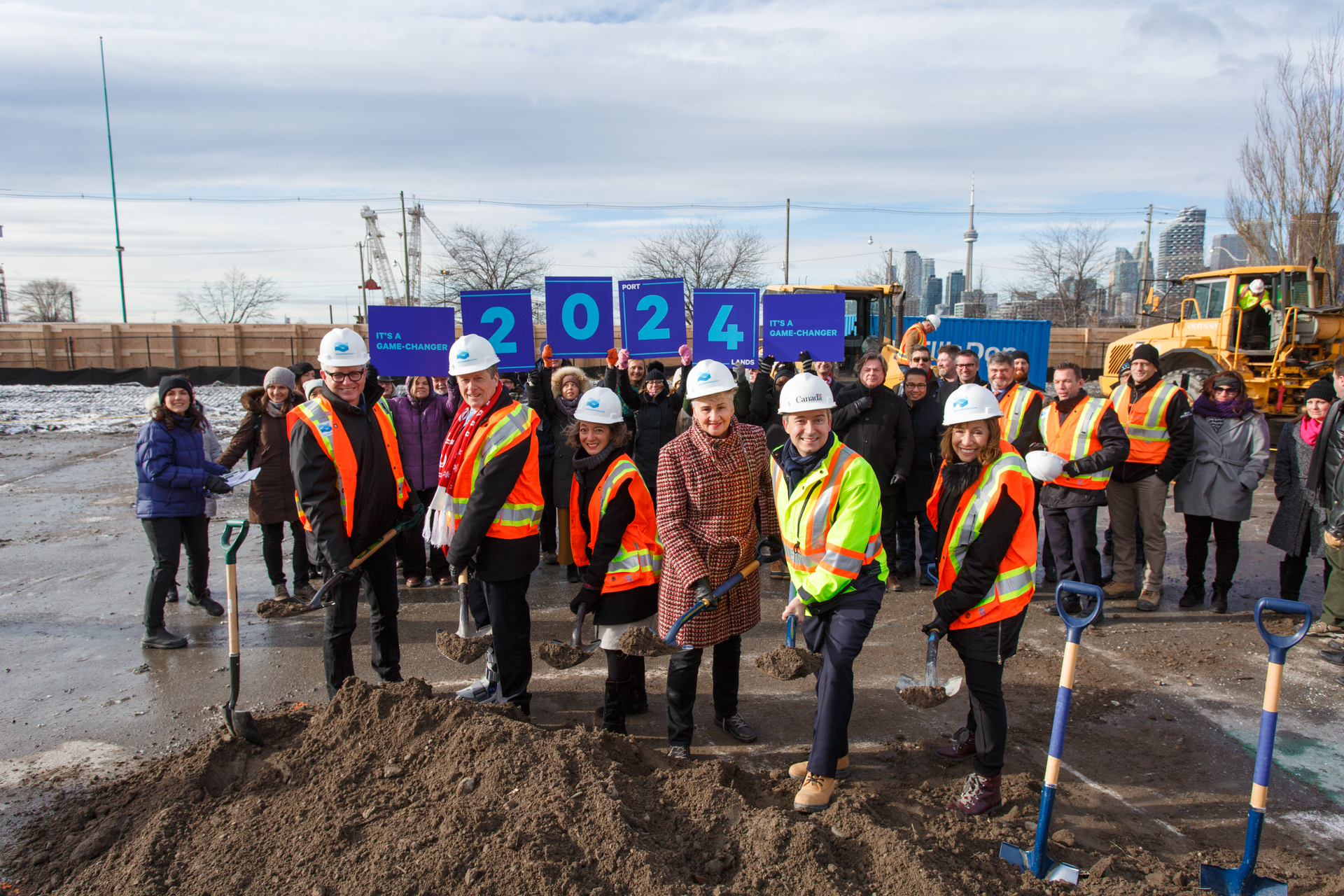 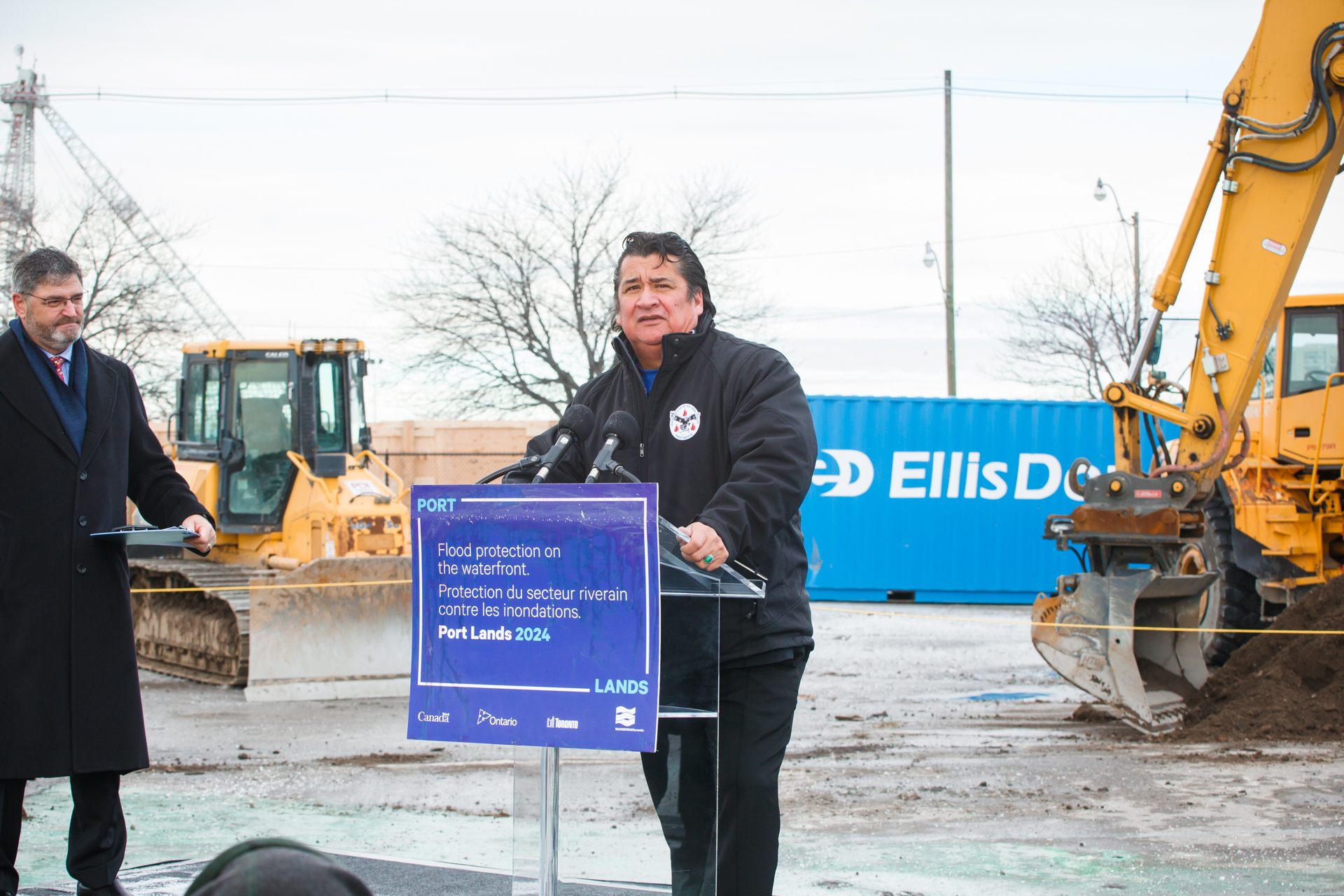 In November 2018, Mississaugas of New Credit First Nation Chief Stacey LaForme reminded the crowd at Cherry and Commissioners Streets that they were standing on a former river.